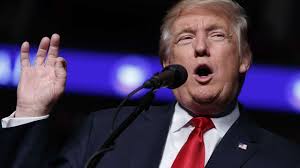 Trump ......Could this man be dangerous, or not?
A view:
He launched himself as a "Populist". Populists rely on promises to the masses including many who are uneducated, many who want better in their lives for various reasons. He was elected.
Now cast your minds back to the early thirties in Europe. Many of you cannot, in reality, remember what went on , but you can indulge in virtual reality by "Googling" or by reading History.
Germany was in dire economic straits after WW1. The conquering powers had put the squeeze on this Country, big time. Hindenburg was in power and Hitler was appointed Chancellor. Hitler was ambitious and idealistic. Enter "The Night of the Long Knives" where he consolidated his grip on power. He gradually got rid of those important elements which were in his way of fulfillment. Right wing extremists were already organised, supportive and active. The stage was set.
The main promise to the people was "Libensraum" ...the extension of living space for Germany and a hope for better things. Meanwhile a convenient "Scapegoat" was conjured...the perception of harm coming from racial groups and minority groups like the Jews and various others. This notion is very powerful for ambitious Politicians.
Fast forward to the various pushes and invasions of European Countries prior to 1939. and the ultimate declaration WW11.
Remember that Germany was a Democratic Country prior to 1939 and remained so, after 1945. But in between?...well, you know that!
Now in the USA we have Extreme groups: We have the NRA, the KKK and a whole bunch of extreme Religious organizations, most of which support the present administration..
Now, YOU ALL can decide what this means...I leave it to you.

Email ThisBlogThis!Share to TwitterShare to FacebookShare to Pinterest
On Preparing and Eating Soft-boiled Eggs

Do you eat soft-boiled eggs? How do you boil them, how long? How to you open them, which end, why? Do you know why brown bread is traditionally eaten with them?

We cover our eggs with cold water and put the eggs into the pan so that they are just covered. We then bring the water to the boil. At the point of boiling we time for 4 minutes. the eggs are then placed in egg cups with the pointed end up. The pointed end has no air space and so is 100% egg white (albumen).

I tap twice at one point with a spoon and then using my thumb I fold back the top....Usually it shows a clean edge with no small fragments of shell. Then I eat.

The apparent traditional reason for using brown bread is that there is a good content of B vitamins. Any runny part of the egg still may have an anti-B enzyme so the the bread helps to off-set any degradation. It is also a good taste experience! .

Many cut their toasted bread into fingers and dip them into the yolk....yummy! This is just our way but follow your own bliss! Personalized rituals are fun.

We have one for poached eggs too but that is another story.

:-) I eat more than 300 eggs a year....My cholesterol level is good....The myth that eggs are not totally good for you has now been debunked and we have never had a salmonella attack by eating runny eggs. My wife and I are 72. 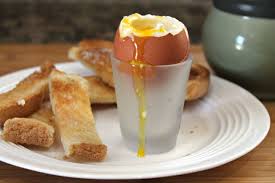 But be careful of Romaine /Cos lettuce from your local Supermarket, apparently!
Posted by Dave's Blog at 9:39 AM No comments: