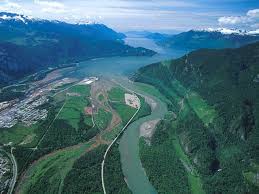 I am afraid that many do not understand how Estuaries form and inexorably progress to forested/drier land.

For an Estuary to continue to exist as a wetland there must be progressive growth at the the seaward end. This is hardly happening in Squamish. We have an active port which involves regular and expansive dredging (snipping off the the growth end of the productive estuary land). What is not being used by the Port facility and Urban Development is being used for log sorting and storage, leaving a smaller and smaller area for wetland.

Meanwhile the more mature estuary to the north is getting drier and will eventually be swallowed by greedy developers. We are starting to see furtive surveying ribbons and pegs appear amongst the shrubbery.The whole peninsular is going to be severely developed and will encroach on any land that is showing any sign of progression to drier land.

Remember that the present downtown of Squamish was once estuary wetland and not so long ago. Our present estuary is becoming rather like a shrinking wet museum.

What we should be doing, if we want to continue having a port facility, is constructing a floating port which extends out into the Sound in front of the 'growing' estuary. This floating port could be connected by a thin bridge/road raised on concrete piles....Hey maybe I am an unfulfilled, reincarnated Isambard Kingdom Brunel

The Chinese and the Arabs in Dubai are very good at building things on the water.

Note: My point is that due to the apparent lack of understanding about estuaries we will lose it in the not so distant future due to the continued apical dredging I mentioned. The estuary will simply disappear due to ecological succession irregardless of any development further back/north. In short the developers will find that the land has become drier and for the pickings!.

I was serious about the floating port concept which would solve the problem in the future....but ironically too futuristic, I guess. I will pursue this in my Quixotic mode! :-)
Posted by Dave's Blog at 11:17 AM No comments: 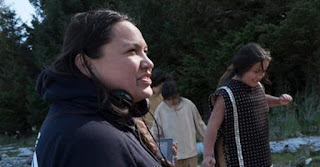 What does "making official" mean?....Meaningless. The language must come from within the people. In Squamish we have a wonderful band person who has fostered her language and teaches it (Tsawsayia Spukwus). She is the model to follow...not some 'outside' dictum of officialdom.
This woman's work reflects her enthusiasm which has rubbed off on her people....and us. This can happen within any indigenous group in BC or any other Province and I hope it will...."Unofficially". I do not speak Norse or Latin; I speak what I learned in my village of origin in my time. Of course, the English language is a mixture of Anglo-Saxon, Norse, Latin, French and others...all from our history and naturally evolved; as all language should be.
Posted by Dave's Blog at 9:46 AM No comments: